Pt. 1/2: Chad Johnson Explains why he says "Men, Even MLK will Never Be Faithful" 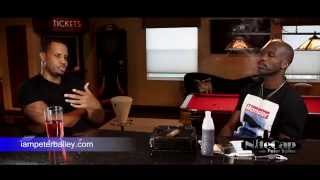 Pt. 1/2: Chad Johnson Explains why he says "Men, Even MLK will Never Be Faithful"

Peter Bailey continues his critically-acclaimed docu-series by venturing to Chad Johnson's Davie mansion to continue their much talked about debate on monogamy. The two break down the many temptations that come with being faithful and discuss even Dr. King's infidelity.

Here’s my deal. Whats the point of marrying someone if you plan to be single? Doesn’t make any type of sense to me.

I fucked up and some what became like him...its healing and some ways hurts because most of all us tried it and failed

Peter Bailey please interview a woman that is a true follower of Jesus Christ about monogamy. I love how you interview, you are hungry for truth, you remind me of Bartemaeus in the Bible. Chad is coming from a carnal, self-centered standpoint. Now Peter, in all your knowing, get understanding, I pray you find a true believer to help you navigate, not a celebrity preacher but a true shepherd. I love Chad but he has blinders and needs prayer. As a woman in Christ, I rather be alone than with someone who does not live out Christian values, and it’s always harder to come across the right man but it will be worth the wait and it’s not the worst thing in the world to be single, but in the waiting it’s about serving God in the process, because that is what Christianity is, living for Christ and not yourself. We get mocked now, but in the end we win. The devil has been selling men and women the lie of the “American Dream” from the beginning and what the standard of beauty is. Men are having sex with multiple women to fill a void. The same way addicts abuse drugs or alcoholics abuse alcohol. You think you’re free, my brother that’s bondage at its finest. You can always find someone who has fallen as an example, but which of us has not? I’ll wait....and what does that have to do with the price of tea in China? Just because you fall or fail at something doesn’t mean you should continue or just because MLK cheated doesn’t mean all the men of his era did or that we don’t have a chance. Who can help us? I know God can, the same one who gave you the power to be a successful football player. You worked so hard, you were determined but was was your end? God will never fail you and he can help you live right but you have to give him the same commitment, it may not make ya famous or a millionaire but you’ll be “A future H.O.F.” in Heaven!
Beloved Chad, even if the man leaves the Christian woman, or cheats, she will be hurt but she will still be fine without him because Christ is her God not money and not sex. Dear Chad, you are right to ask how many people really want them type of girls, and the answer is not many but who cares? Very few find the way that leads to life. What does it profit a man to gain the world and lose his soul? You say those other girls are winning because of what they have, and what they do..... child please!
Look at how all these cheaters and so called ballers die in the end? Drugged out, unfortunately murdered, sick, alone and miserable. I take the time to type all of this because I love you as a man created in the image of God.
Now, kiss the baby!👄👶🏽

This Peter dude a clown bro

I am so glad I wash this bideo

That's the Capricorn in Chad! We don't trip off the small stuff!🐐

Chad just doing what he wants just like anyone else

Desires are tied to the Eyes....we eat with eyes.. why not is our sexual nature ....Man Through his words have manipulated this theory ..we are all Polyamourus by True Nature..

Chad is just real hes like me i speak on what i see in front of me not what i hope for . u cant get no realer then that.

He acts like he agrees and understands chads nonsense just to get him to open up and talk openly for a good interview. chad is an idiot that think hes using people and he will be used and alone in the end.

Chad is saying Monogamy isn't natural. I agree. Why do you think you see women trying to make their men be faithful? Because it's not their inherent nature. Society has made these social constructs that the average man can't live up to. It's all man-made constructs.

Peter so fake and talks too DAMN much, lol!!! Shut up and let Chad spill the tea! He putting all the naive women on to game.