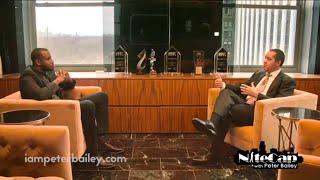 Peter Bailey takes his critically-acclaimed series to New York City where mega-developer Don Peebles invited him to discuss the Presidential election, hip hop and the show Empire's effect on urban youth. With a net worth of more than 700 million, Peebles heads the largest black-owned real estate empire in America. In this discussion he decries the nation's widening wealth gab particularly that of minorities.

If Don Peebles is African American then I am confused to a whole new level. Dude is obviously latino or something

Peeble's political views in terms of Black people is spot-on

I hear him. however what about the constant images of black men who become wealthy and successful dating outside of their race? I respect who Jay-Z is he has taught a lot of black people through an album about at least doing the research of understanding credit and why to buy the block than a lot of wealthy blacks who should be implementing freedom schools and financial literacy to children from elementary, middle, and high school aren't doing it. The audacity.

Awesome interview, one my favorites

None of the billionaires have made it through Hip-hop ... 3years ago now Jay z first billionaire through using that same platform. Liked this interview .

What school did you go to Mr Peebles? Im from DC born in 61? Hillary voted against Civil Rights Act in 1964. The Democrats are Racist the worst city and states are democrats run. Bill Clinton Signed Crime Bill. Whites were the first Slaves Barbary Coast Slave trade Irish .

I have been so encouraged!!!

to many interruptions from the other guy.. please tell him to pipe down some on his opinions and outburst. overall good vid

Very good interview. Many relevant points were brought up around the economic imbalance in this country. This interview needs to be heard by many more people and action needs to be taken.

I am extra late but you're a blessing for providing this type of content. Thanks so much brutha. Please keep it up!

Ahh...where to start.
1. I hate when people wear blazer over turtle necks to look bright(when they actually are not that bright)
2. Don't say you are an ancient history buff and then follow it up by making Rome empire/USA analogy. Everybody kinda knows that one.
3.the experience of an Afro diaspora is completely different than that of an African American so who the fuck are you to comment on race relations/race obsession in this country?
Now I do believe the only way black people can achieve equality in this country is through economic equality. That's fundamental and simple even though it's hard for a lotta people to understand. That, we agree on, but the question is how can we achieve economic equality?
1. According to Mr. Peebles himself, NAFTA killed many manufacturing jobs. How? Because it allowed cooperation to exploit cheap labor in Mexico.
2.Why did NAFTA get a bipartisan support from both parties? Because both parties had the same donors and they serve the same master.
3.With in the same interview Mr. Peebles argued reducing government involvement in economic growth and letting the private sector handling it will bring about economic growth.HOW SWAY??Cause,The same private sector that spent millions of dollars lobbying for NAFTA cares about poor people? Right!! Lol
4. I'm suppose to trust the same people that corrupt politicians to give a shit about me?
5. Nah Mr. Peebles, people like you should stop bribing politicians and we can finally start trusting the government to conduct massive infrastructure, spend money on technology and science and the school system.
6. You also said it yourself the reason behind strong black middle class communities in the country was government contracts and infrastructure developments.(conduct by the government, pushed by progressive mayors)
7.Do us all a favor pay you fair share of taxes.
8. Miss me with that libertarian talk
9. Give me one example of a country with sustainable economy built on the private sector. One...I will wait.