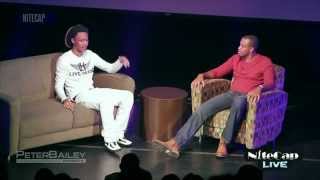 In a special live taping of NiteCap, acclaimed journalist Peter Bailey calls a town-hall meeting to discuss with Miami hip hop star Ice Berg the problems destroying Miami's inner-city and that of the rest of urban America.

I like this interview a lot. I wish I was in this conversation

I agree we as a people must chill with all this genocide on each other but bailey its not true. We dont kill each other as much as they have and continue to kill they are just very intricate at hiding and making us believe we are a sad poor race like it's not 5 black billionaires. Truth is they took a mass race people for over 5 centuries and counting n systematically destroyed put whole history and sense of family dynamics.THERE IS NO WAY AFTER ALL THAT TRANSPIRED DURING SEGREGATION CIVIL RIGHTS MOVEMENTS N SLAVERY THAT WE WOULD PROVE UNAFFECTED . NOO UNSCAFFED MAYBE BECAUSE WE'RE STONG.WE ARE JUST WAKING UP OUTCHEA SO BLACK PEOPLE PLEASE DONT BLAME YOURSELF FOR IGNORANT ASPECTS OF SOCIET DO LIKE MY KING BILLION 💯👑💗BASICALLY SAY U EITHER APART OF THE PROBLEM OR THE YOYR THE SOLUTION HE WAS APART OF THE PROBLEM NOW HE APART THE SOLUTION AWESOME ASS BILLION!!💖💖

nawww Berg it ain't babies having babies cuz u a success story out of that. but it's a mixture of why we can't come together as a unit which is being humble willing to listen understanding what different healing process there are that we as black ppl have to cope with and even stay on track. it's even family members you might not know they are your family because of the beef parents had when they were siblings or 5 women with 3 kids each beefing over one dude so da kids won't know nothing bout they other brothers and sisters. to me the best leaders are the ones who can come down and work among the workers from time to time, matter fact who are the leaders???? lmao shit crazy mother fuckers just selfish won't even take time out unless you made a certain amount of dollars and have some type of brand before they consider using you for they come up!!!

Real good interview. IceBerg one my favorite rappers. He always reminded me of a southern Nipsey Hussle on a mindset level. Prolly cause I started listening to them heavy round the same time

I like this here real talk about couple common problems in Miami and the every day life in general. Will be looking forward to watching this more often.

This is one of the best interviews I've seen in a while. Fucks wit Iceberg for real tho

We need this locally in Saint Louis chi town areas