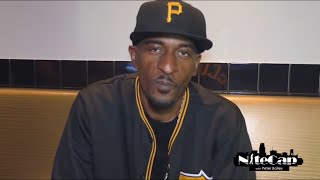 The legendary emcee Rakim invites Peter Bailey to share a NiteCap at the 30th anniversary of Paid In Full inside NYC's BB Kings where the two discuss police brutality, stereotypes & the need for artists to speak on social issues. Rakim Calls on Hip Hop Artists to speak on Injustice & Police Brutality

If I was Ra I'd just stick to rhyming and let the world burn because no one can save mankind. Its almost curtains on this whole shit show and the sooner you can accept that the better you can function! Fck the world!

All Hail The HONORABLE !!!

I cannot say that I would glorify the young bucks coming up. They have their thing, and that's them. Its not me. Coming from the East Coast moving to the West I find that history is forgotten, not known or just ignorance has set in. I'm in the Bay Area. When I came here I knew where I was. The Black Panthers in general, disciples of Malcolm X impacted me as a youngster in the East. I thought it was the similar feeling of impact but, it wasn't, That's disappointing.

Big up to Rakim, played big part in me picking up the Holy Quran, these new Kats don't enlighten people that way Ra, brand Nubian did, big up to the old school

We still talk about real shit.. but it seems as though the world doesn’t want that.

RAkim you need do a song with MC shan

Truth revealed rakim the deal an emcee so real, one u feel dropping game like keys no wonder he set Hip Hop free. I know 3 rappers Krs, Rakim and the rest.

Cant those fucks in the back stfu. Annoying as fuck

God is a germanic word not greek !!!!

Maaan, The R is The God of The Game(hip hop)!!! He invented lyricism & substance to rap music. Without him there would'nt be(lyrical) other's..Hip Hop is so watered down now, it's to the point that I don't really listen to the new rappers. I really miss Ra, He really needs to drop something for his personal fan based. Thanks for blessing the microphone and the rap game!!!
Rakim, Holy R You!!!!

Check out cid and Dee Dinner at 7..This interview was on point and Mr.Rakim glad to see you God you always talk with some substance just like your rap..Thanks God for all the albums..Holy are you Rakim...
Much love and respect to you...
Cid & Dee

Am from the place of 3 sevens