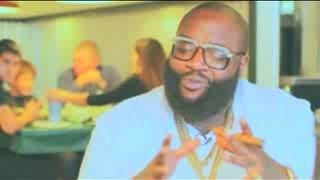 In Rick Ross' first interview of 2013, he and Peter Bailey discuss his title track on Django, Spike Lee's criticism of the film, his acting debut on "Magic City", reuniting with Trick Daddy and even a possible book.

Rozay a cool dude for real

ALL THAT FOOD LMAO

Can I please ask why you judge someone based on their past instead of their present? Just curious because you're obviously not the only one, not tryna start shit I just want your opinion

Jesus isnt in yet because everyones into self made lool at me. Satan runs this town. Wake up Jesus is coming

my nigga ross said a "bolitta" boss....some of yall don't even kno dat

lmaaoo! they set up my sports-bra wearing nigga with this interview leaving all those empty plates on the table . lmaoo

I listen to Ross not that often but I can say that he is an intelligent person. His vocabulary is strong. I like how he invested in something with his money.

FIRST OFF LOOK AT ALL THE FOOD RICK ROSS HAS IN FRONT OF HIM BECAUSE I NO THAT WHITE GUY ISN'T EATING ALL OF THAT. AND SECOND OFF ISNT A NIGHT CAPBA SEXUAL EVENINING?? ME:YES IT IS

i see a lot of food on the table lol

I yelled THE BOSS!! When I saw Rick Ross in the 6th episode of Magic City.

looking at what ?? Cheesburger ?

he will be soon when they gonna CAP that fat ass !!

Funny how some of these comments come down on Rozay for not doing certain things on camera for our eyes to see, but if he did, I feel like the same people would say something along the lines of, "ohh, he only did that because the camera is rolling". The guy is a wicked boss, but that doesn't mean he has to disrespect others by smoking inside while others are trying to eat and/or pop a bottle during an interview just to prove to you that he is what he is. Just enjoy it for what it is.