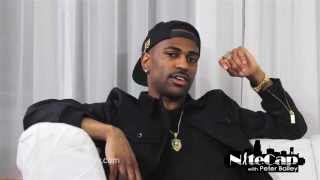 what the fuck is up with this guy's top lip.

Big Sean is not a good subject for an interview. He comes off very sophomoric and trying to sound calculated when answering simplistic questions. Kanye, Jay Z or Eminem would be more polished subjects about life, wisdom and success in Hip Hop

probably not important..but I think there could have been better body language from Peter Bailey. He kind of seems uncomfortable..fidgeting..constantly adjusting his sleeves. Idk cool interview regardless Just a tip though ..just to not make it so much robotic Q&A ..

....three years aint that long when you had the top selling album of a year.

I came for SEAN

Its Seans interview. If you want Eminem go look him up.

Man I wanted to hear about Em, he has been on a hiatus FOREVER!

@2:58 nothing wrong with media influenced hip hop. Its fun music, and it doesn't define music as awhole unlike what most hip hop purists say

Listen I’m just trying to get my views up so maybe I can get my music heard. I’m young so I’m used to being underrated I’m a female so I’m used to being treated unequally in a mans world, and I rap, and with that it seems to gives every single one who doesn’t know me or my style a reason to think that I’ll won't be good at what I do. Writing is a hobby & most people have said I’m better then they expected. So hear me out please. I write real, & all I’m trying to do is gain Respect–Rae Malato