2 Chainz on Arrest: "I'm Only Trying to Feed My Family & Entertain" 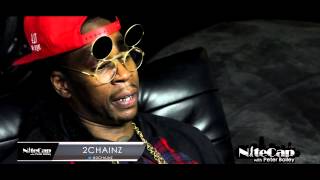 2 Chainz on Arrest: "I'm Only Trying to Feed My Family & Entertain"

Peter Bailey shares a NiteCap with Atlanta rap superstar 2 Chainz at his album listening party for "B.O.A.T.S. II: Me Time", then heads to the studio where 2Chainz discusses his recent arrest, invoking a new soulful sound, advice from 50 Cent & his unwavering work ethic.

Lets be honest. Mlk would not approve. I say that because music is a reflection of its audience (not vice versa) these dudes smart, but they see we are dumb n ignorant so that's what they give us.. They know selling drugs not kool but they glorify it because they think that's all we want to hear. So instead of them putting out songs with some intellectual value they put out the most ratchet shit they can put together n sure enough the brainwashed masses who is stuck on false perceptions of life, and glamor & gold gravitate to it and love it smh it's messed up but at this rate rap music will not survive much longer.

Crack is wack. Weed is where it is. Gotta keep my people in new orleans off the dope too. Don't sell that shit. Snort that coke if you got to but weed is the choice. Like George Carlin said, weed will let you put it down if you need to. I put it down a few years back but I still have love for it.

Much better interview when he's like this, not too much hype and so on!

It seems as if he don't even want to be there!

Why does he seem so melancholy?

I Felt Catatonic Watching This...

Let 2 Chainz do his thing stop telling him what to do.

which part does he talk about 50?

Only watched to see what he said about 50

i never liked 2chainz music. but i respect 2 chainz as a person. if u readin this comment chainz, i think u to smart to be doin wat u do. ya music & clothes dnt match ya person. u q real nigga. speak on somemore real shit, u too smart nd real to be reiteratin how real u is, tell these niggas whats really goin on. i know u see it

i live in atl