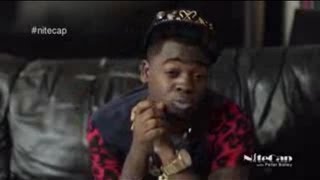 Peter Bailey shares a NiteCap with 50 Cent's protege at his G-Unit rehearsal inside New York City's SIR studios where the New Orleans native details being shot six times in front of his mother, changing his life around, 50 as his mentor and giving back to New Orleans.

Man that's peanut I went to school with this nigga

when you start loosing you're friends damm!!!R.I.P Locha!Victor! and to all those who lost their loved ones!!!love peace! real Talk!!!!!!!7

"You know what I'm saying"
Ima make a shirt of that quote.

I respect this cat, he's humble and intelligent
one of new orleans underrated artist and he's involved with positive things in his community after katrina, peace

yo that interviewer could pass for Niki minaj's ex man and pocket book carrier for her safaree!😭😭😭

I thought fiddy got shot 9 times tho

i like the fact that he changed live a better life now if every young can see like him its would be better and his smart too.

Who says "Na what I'm saying?" More? Kidd Kidd or Scotty P from were the millers?

Why did he get shot?

Losing anybody so soon in anyway fucks you up and changes you, for real

" like a cartoon that bih b bukuuuuu long" bruh N.O. niggaz wild... fam talmbout gettin shot like a football play ...

french quarter and bourbon street are not the only tourists spots bruh ... most popular tho but not the only.... much love to kidd kidd tho #nola

Why didn't he just start the car?

You'd have more subscribers if you treated other people decent, not just the people who can help you out NiteCap.

Kidd Kidd is nice wid the flow..if yall could listen to your heart sometimes youd understand..that when niggas repetitively be saying..younamean...yanowahimsayin..yafeelme...yadigg..knowatimean..they real niggas all heart to the core...thats how a nigga keep himself in check wid reality...yaheardmeh!

Nikka said 36 times in another interview he said 32 which one is it?

Go head switch the style up and if they hate let them hate and watch the money pile up... 50