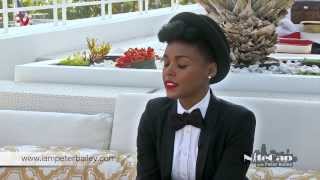 Peter Bailey shares a NiteCap with songstress Janelle Monae at Highbar Dream South Beach where she discusses her new album The Electric Lady, working with Prince and reawakening black soul through the music of legends like Bo Diddley.

"I pray that every Man desires to be with an Electric Lady."

Thank you for not being an corporate empowered seductress and succubus . Keep your music real. Hold your identity. In the face of great power hold your ground. Stay low, stay strong, stay underground.
You have the real power. Love and truth.!
Spread the word

I've been listening to this woman since 2008...still a fan!! :D AMAZING VOICE AND INTELLIGENT INTELLECTUAL ! She's very beautiful as well :3

I appreciate the questions he's asking her, but he gives me this just woke out of bed alcohol for breakfast vibe lmao

Bo Ditley was Rock-n-Roll, Black ppl created Rock-n-Roll...Muddy Waters, Bo, Li'l Walter ppl like that created it..
Elvis, the Stones, the Beatles they adopted the genre..We don't teach that in our schools.

I really respect Janelle and I actually did a cover song of her's on my channel. I would love for some of you to check it out and I hope you enjoy it :)

She is very talented and her music is superb, but here she's just mouthing the usual pretentious platitudes.

What an intelligent woman.

she's so eloquent when she speaks she's really an admirable individual

Pure class.  This young lady is all about lifting things up.  I'm glad she's got a voice.

I witnessed an excellent video. Jonelle Monae is an exceptional woman as an artist and as a person. Her substance and beauty inside and outside and truly outstanding. Thank, PB for a gr8 interview.

she is genius and adorable... music is back to its roots ..she definately is a legend in the future

She is INFLUENCED from the greats as JB,Prince, MJ & Stevie and creates her new personality her music diversity and persona..this is unique true and is good for music

Janelle is so refreshing, not just as an artist, but as a human being.

I wish that men wouldn't demand a space in every single aspect in society. I'm not saying men don't play a role in Janelle's story, nor that they don't deserve a space, but they need to find their own way in, and actually listen and respect before they assume they are entitled to a place in her artist's construct. Men already receive so many privileges that they refuse to see, and they presume to feel "left out." Women feel left out of important things in society much more often, and men can learn how to deal with that. COMPASSION FIRST.