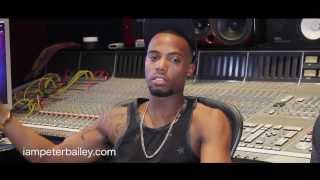 No they did NOT just say that rock music was "just as misogynistic" as rap. Are you always this stupid or making a special effort today? How is "hanging out... down the street..." even remotely close to the recurring theme of "Fuck Bitches, Get Money" in your shit music.

Love the video Peter Bailey and the crew, great interview, real inspirational from both sides

We Need your ROCK ALBUM dawg

It's about having a proven business model. Record companies hear what's on the radio, what's selling, so they duplicate it over & over & over. They are simply giving the market what it wants. For artists music is about art, expression, emotions but for most record companies it's about making money. Business=profit.

I don't think it has to do with race. The big difference between a victoria's secret model and a video vixen is exclusivity. It's special to be a VS model because there are only a few spots, it's limited. Any woman with a big ass can be a video vixen. Any time something is rare, it's seen as valuable. Think about diamonds, fossils, bugattis...